What will happen to the astronomy in the future? 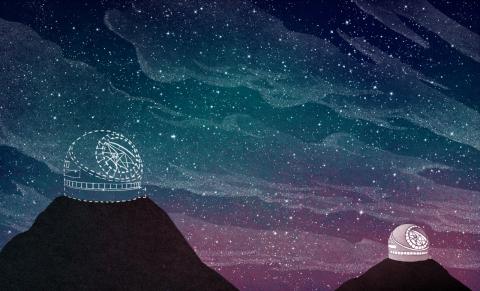 I read in an article by candidate of Sciences "XXI CENTURY: AUTUMN ASTRONOMY" and respond to the question "What will happen to the astronomy in the future?" Express their opinion on this issue, and will try to be brief, for objections and comments can be many.

PhD think in other categories - much higher than, say, Amateur astronomers with medium (though even higher) education. Scientists behind a huge volume of processed information on a particular issue, making them inaccessible opponents. To argue with them Amateur astronomy is almost impossible, and not necessary (which, unfortunately, make some fans, besides having in mind only, a textbook on astronomy). However, to Express my opinion every Amateur astronomy.

Right in everything what is written in the article, but he was right from his point of view, analyzing their knowledge, and describing one of the possible options for the development of astronomy. The future prediction is very difficult, even based on the accumulated centuries of material (of course, if you are an astrologer) so that you can question the decisive words about the inevitability of the extinction of astronomy as a science. It is doubtful, and the assumption that astronomy in the 21st century will give the palm of his primacy among the Sciences physics or biology.

One thing is certain. Man (again) conclude that all the discoveries in astronomy (and other Sciences) is already done, and again wrong. It was so many times for many centuries. So it will be in a hundred years. In the year 2101 will have an article telling that the 21st century has brought many new discoveries in astronomy, but astronomy this has run its course and gives place to other Sciences. And called this article is "THE XXII CENTURY: AUTUMN ASTRONOMY", and an article in 1 room for the current year (forgive me, the author), should be labelled "SPRING ASTRONOMY" to infinity.

Let's try to "justify" astronomy from the point of view of nature itself. Not going to flip through the thick tomes of astronomical encyclopedias, looking for the contradictions expressed in the above article. Consider a simple, obvious and understandable, even to a student, example.

1. Photon, breaking away from the radiation source enters the receiver is the human eye. It - ASTRONOMY!

2. In refracted from the lens system of the eye, the photon falls on the retina. It is PHYSICS!

3. Crashing into the cones or sticks on the retina, a photon causes irritation of the latter and a signal of the radiation source enters the brain. It is BIOLOGY!

Alas, gentlemen! Astronomy in the first place! It is inherent in human nature! As we would not want all of humanity to push astronomy into the background, pulling forward the physics and, especially, biology, we have nothing. Astronomy has always been at the forefront of science, and even a little "going" over the edge first. So the "First astronomy".

What is next for astronomy in the future? New fundamental discoveries of new physical constants, which we do not even assume that that will allow the person to move faster than the speed of light. New theory of the Universe and a new understanding of the world. The commissioning of the largest optical telescopes on Earth and on the moon that allows you to see planets around other stars and discussing galaxies and quasars. In depth study of globular star clusters. They will lead to new discoveries in astronomy. Perhaps, indirectly, we learn about the existence of another Universe next to ours. After all, the World around us is infinite and infinite knowledge of the man or another mind in this World.

Amateur astronomy is booming, and in the new century, as never before, fans will have new opportunities for observations, new instruments, new receivers of radiation and methods of astronomy. Observations of the Sun, variable stars, planets, asteroids, comets, nebulae, galaxies will acquire a new level and is increasingly scientific in nature, successfully complementing the professional astronomy.

Observations of meteors will always remain the prerogative of the human eye as detector. Even the Moon will bring astronomy, even Amateur, new discoveries. And it's not the bravura optimism so defined by the evolution of science. In any science there are UPS and downs, and I think in this situation it is possible to speak only about this, but not about the demise of astronomy as a whole. To summarize and to paraphrase a famous dictum of the king who died, we can conclude the following.