Astronomy in the relatively near future 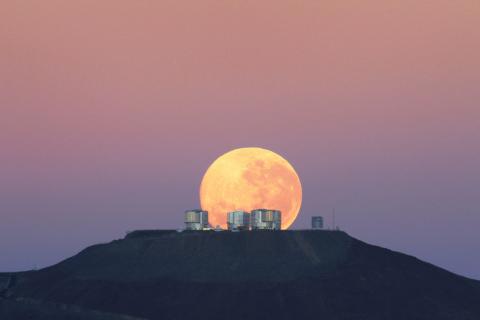 The question of what we know (and what we don't know) about space, of course, care about the minds. And not just in terms of, so to speak, "utilitarian", that is, in terms of practical interest in the planets of the Solar system, which in the near future will fly the astronauts and interplanetary environment through which they will fly their missiles. The study of the Universe, understanding the nature of the processes occurring on distant celestial bodies, are of immense educational interest. One well known astronomer absolutely correct in this regard, said: "People, particularly those different from animals that sometimes raises his eyes to heaven".

While humanity exists, it will always attract and tempt the universe. I was asked to write how I imagine the development of astronomy in the nearest future. In our time, to be a prophet in science is quite difficult, if not hopeless. History is not just cruelly laughed at in any scientific predictions. I will allow myself to cite just one example. In 1955 in England published a book by the famous physicist Thompson's "Foreseeable future". This book is very interesting and exciting, a forecast of the development of science, technology and public relations for the next 50 years. The author predicted that the first entry of man into space will happen at the end of the twentieth century. And now, after only two years after it was written, launched the first artificial satellite.

In predicting success science, long period to proceed from the purely "academic" prerequisites absolutely not enough. Maybe Thompson would have been right, if the development of science were in harmony. However, as a rule, it does not happen.

No matter how difficult, and most importantly, a thankless task to predict how it will look ancient and forever young the science of the sky, I'll try to do it. Apparently, I am guided by the natural human weakness to attempt to lift the veil on the future.

So, what can you expect from astronomy, two decades later? In order to try to answer this question we need, first, to try to identify the most promising directions in the development of this science, and second, to understand what progress had been made in astronomy in the past.

The revolution in physics that occurred in the first third of the twentieth century had a huge impact on astronomy, quantum mechanics, nuclear physics, relativity theory, widely used in astrophysical studies of the last two decades. At the same time in the practice of astronomical observations introduced the achievements of radio electronics. New methods and tools of the study allowed us to obtain these results, which previously could not even dream of.

Twenty years ago virtually the only source of our information about the nature of the heavenly bodies was coming from their light. Meanwhile it could be assumed that the heavenly bodies, at least some, and radiate in the invisible portions of the spectrum. But astronomers knew nothing about the radiation, and the ignorance of our very limited knowledge.

The biggest success of the "celestial science" of recent years was the development of radio astronomy. As the name implies, this science deals with the study of radio waves emitted by some cosmic objects. Even though radio astronomy was originated in 1932, at the time it was not. Really it began to develop only after the second world war. Nevertheless, the success of radio astronomy is amazing.

If not, this area of astronomy, we almost never would have learned about interstellar matter, the rotation and the dynamics of our stellar system, the Galaxies, the nebulae that formed after the Grand cosmic catastrophes explosions called "Supernovas", and many other, no less important and interesting.

Radio astronomy has revealed a brand new phenomenon in the Universe including the amazing stellar system, the radio galaxies that emit radio waves of enormous power. The majority of radio galaxies are separated from us by incredibly great distances, billions of light years. Even the largest optical telescopes are not able to detect many of them. In a short time revolutionized radio astronomy ancient science of the Universe. Now it is impossible to imagine its further development without progress for radio astronomy research. Already designed and built a giant radio telescopes with diameters of mirrors in hundreds of meters.

Thanks to the development of the so called "quantum amplifiers" in recent years, it has increased the sensitivity of the receiving equipment. When this powerful research technique was fully operational for radio astronomy will enter a new stage, and who knows what amazing the Universe will open before us. We will accept and investigate radio emission from stars, in any case, loved ones, finally get the long awaited information about the remote corners of the Universe and, apparently, resolve has long been a pressing issue about the nature of its expansion. Who knows, maybe for area where the universe is expanding, is the area where it shrinks? And in a finite universe or infinite?

And, of course, will be discovered in the Universe a new phenomenon, the existence of which we cannot now even guess. There will be a new daunting challenges to solve that will be called upon astronomical science of the late twenty first century.

We should expect a flourishing of "astronomy of the invisible", that is, studies of cosmic radiation that lie on either side of the visible range of electromagnetic waves (light range). The development trend of modern astronomy is to limit the extension of the spectral region, which conducted a study of radiation from celestial bodies.

Previously, we knew nothing about radiation of celestial bodies in ultraviolet, x ray and even more "hard" region of the spectrum. Because this radiation is completely absorbed by earth's atmosphere. However, our knowledge about the nature of the heavenly bodies, especially the Sun, cannot be complete if we don't know the specifics of their "hard" radiation. Suffice it to say that solar ultraviolet and x-ray radiation has a great impact on the upper layers of earth's atmosphere, ionizing and heating them. This, in particular, significantly depends on the radio communication on short waves.

The development of missile technology has opened up the possibility to raise to great heights instruments for measuring "hard" radiation, and thus "break" preventing these dense layers of earth's atmosphere. Thus, in the postwar period, emerged and began to develop a new science, called "rocket astronomy".

The achievements of rocket astronomy 50 years ago would have seemed fantastic. Now we know with very high accuracy, which represents the ultraviolet and x-ray radiation from the Sun, how it changes over time and what is the mechanism of its influence on the earth's atmosphere. On the other hand, the study of this radiation has greatly clarified our understanding of physical conditions in solar atmosphere. And it is of great theoretical and practical importance.

But this is only the first steps of rocket astronomy. We now know almost nothing about the ultraviolet and x radiation of stars, nebulae and galaxies. And this is need to know if we want to correctly describe nature these space objects. Therefore, we can reasonably predict that in the future rocket astronomy will occupy a prominent place in astronomical research. Be built true laboratory in space artificial satellites of the Earth, moon and Sun, which will establish a quite large automatically operating the telescopes are able to measure and analyze all kinds of "hard" radiation from stars, nebulae and other space objects.

Undoubtedly the construction of such devices is not easy. It is especially difficult to ensure with a sufficiently high accuracy of the automatic "tip" of the telescope on the desired star or nebula. Because people at these stations will not. Scientific information will be transmitted to Earth by telemetry.